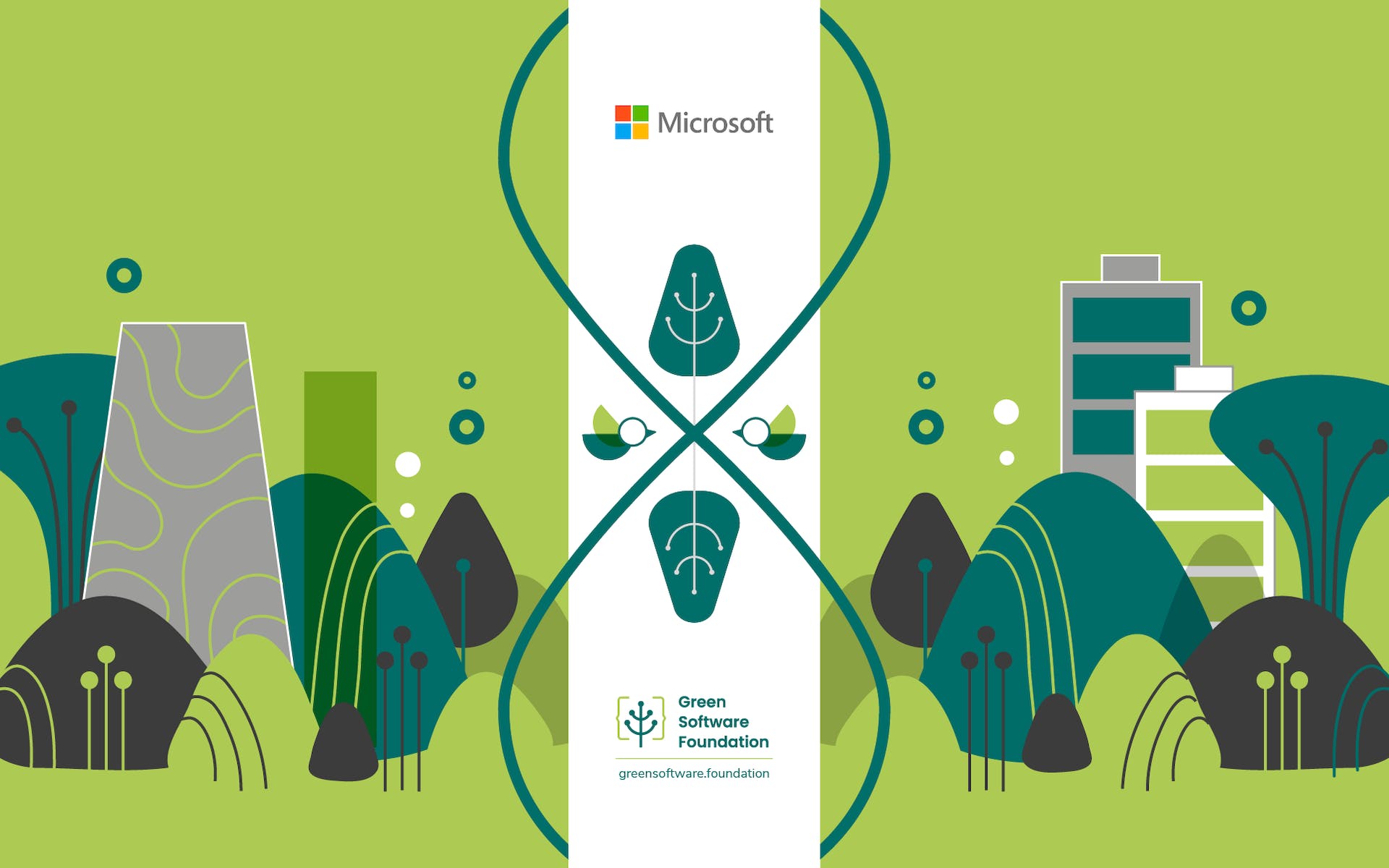 Tell us how the push for green software started

About two years ago, we launched a team focused around Green, connecting with the people who are involved in the business of building software that are green. They are really thinking about ‘how can I build software in the most sustainable way possible?’. They're really asking these questions.

We came up with the principles of sustainable software engineering on the Microsoft Learn platform.

Green software is still at a very early space. There were some thoughts out there, but having some clarity around the space was incredibly valuable at the start. We gathered together all the people at Microsoft who cared about the same subject and got them writing for our blog. The Microsoft Learn module really facilitated the conversations because suddenly you could give somebody a quick half an hour training and then everybody in that room could be on the same page regarding green software. We were then all using the same language and could understand the same concept, so it really helped ‘level set‘ discussions.

Fast forward one year, it turned out that a number of other organizations were also looking at the same space. First off Accenture reached out, then Thoughtworks and then our partners at GitHub. We were all talking about  the same space. There's a number of other organizations like Goldman Sachs which we started speaking to about green software. There were various nonprofits like the Green Web Foundation, Leaders for Climate Action and WattTime, we were all talking about the same things at the same time.

How does green software fit into Microsoft's goals and ambitions?

One of the things we are proud of inside Microsoft is that we’ve been carbon neutral for a long time. We became carbon neutral since 2012, I believe. In 2019, we doubled down and we made an even stronger commitment to become carbon negative. We really made our carbon neutral standards much higher and we encompassed more in what we counted as carbon neutrality. Since then, every year we've increased our commitments regarding sustainability.

The biggest thing that we did—and it's something that doesn't really get mentioned enough—was a commitment to reduce emissions by 55% by 2030. It gets buried in the headlines, but it's actually the thing that keeps people awake at night wondering, how do we actually reduce our emissions. It is relatively easy to offset and compared to reduction. Reduction is incredibly hard, but it's what we need to achieve.

In terms of green software, the real goal is reduction. That's one of the things that we think is really important about green software. As we reduce our emissions across the board, software has to reduce emissions as well.

When Satya Nadella, our CEO, doubled down on our sustainability commitment in 2019, he said, as large as Microsoft was, we can't do it alone. We need to collaborate with every other organization out there. That includes our partners, our competitors, our customers, everybody. We all need to get together and work together because this isn't about one organization reducing its emission. This is about the whole world reducing its emissions. And that is really one of the founding principles of the Foundation: how do we get all of these people together around a table collaborating on this stuff? 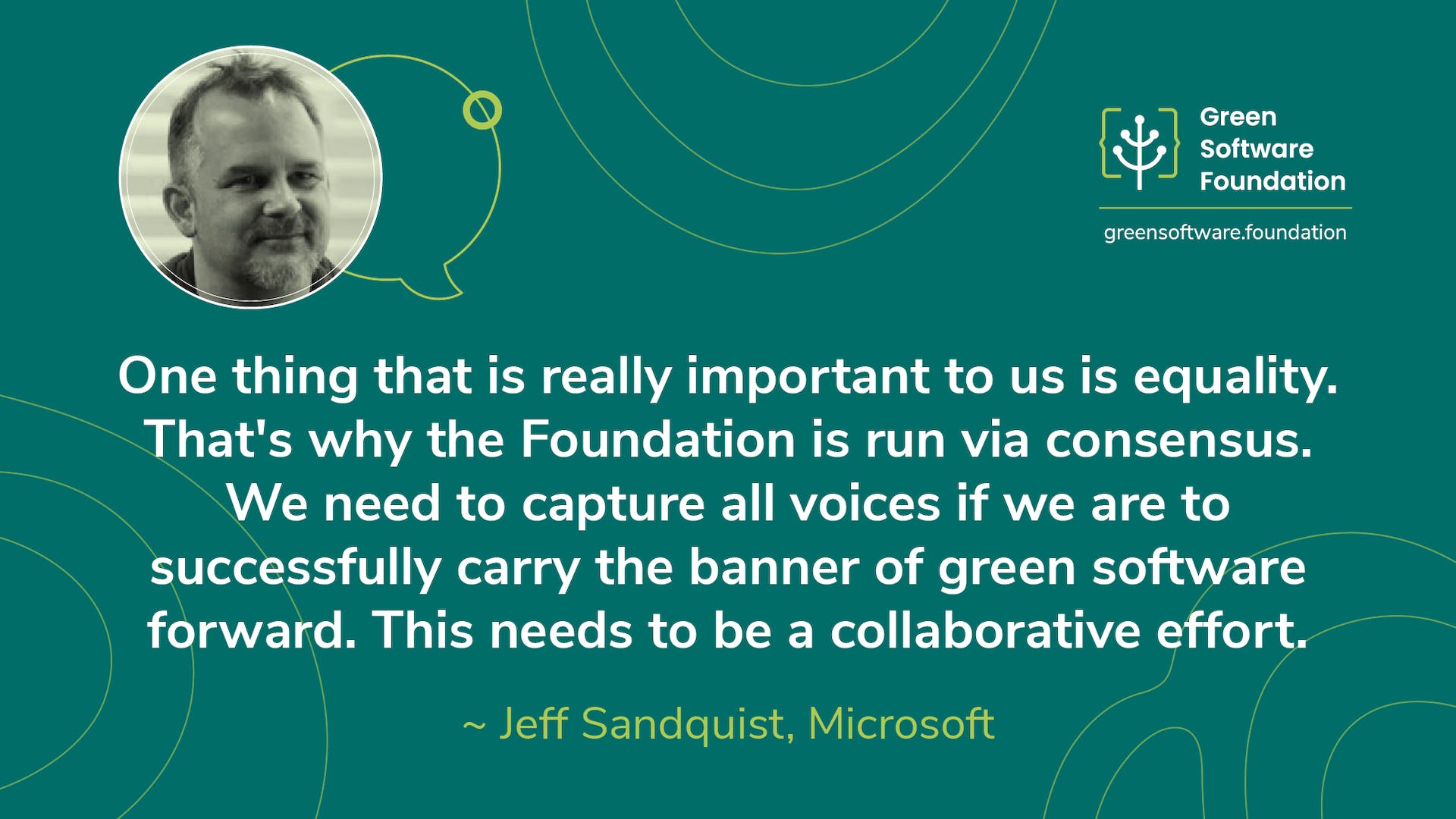 One of the most important things is standards.

There is a lot of a desire by enterprises and organizations or anybody to really look at this space. But, the challenges they face are always the same across all the organization, which is, what can we trust? One of the big questions that gets asked often is, what standards do we need to follow? There's lots of information out there, people say. There are other standards, so we don’t know. Tell us what standards that we need to follow. So that's why I wanted a core focus of the foundation to be about the standards.

Another focus area is the community.

Tooling is another key area of focus.

The reason software really has taken over the world, or rather taken off, is not necessarily because software developers have become more intelligent over the years. The reason is the tooling. People in the business of building software—I say this becomes a lot more people are involved in building software, not just engineers—have so much tooling available for them, making building software easier than ever.

Tell us a bit about how the Foundation functions.

One thing that is really important to us in terms of how this foundation functions is equality. That's why the Foundation is run via consensus. Our first attempt is to get everybody around the table to agree on the same subject. If we fail to achieve that, then there's a vote. But every organization gets just one vote. So, whether you're a nonprofit with ten people or an organization the size of Microsoft with 100,000 people, we all carry an equal voice. That is really important to us.

Why we feel this is important is because we need to capture all voices if we are to successfully carry the banner of green software forward. This needs to be a collaborative effort with everybody, and not just a few people and organizations pushing their agenda. The way this foundation is structured makes that possible. We are kind of really proud of that also.

What is your message to software developers of the world who are yet to discover the cause of green software?

Building software will be the responsibility of everyone on the development team, much like when we look at security, or performance or reliability today. I am excited about the opportunity with the Green Software Foundation to partner with the community on standards, curriculum and support.

Meet the other Steering Committee Members of Green Software Foundation:

Read about our Steering Committee members, what they say about working with the Foundation and their thoughts on the future of green software.