Greenup, Powerup and Speedup (GPS-UP) offers an easy to use energy metric that helps you understand the energy efficiency of your optimizations and the optimization choices you can make. 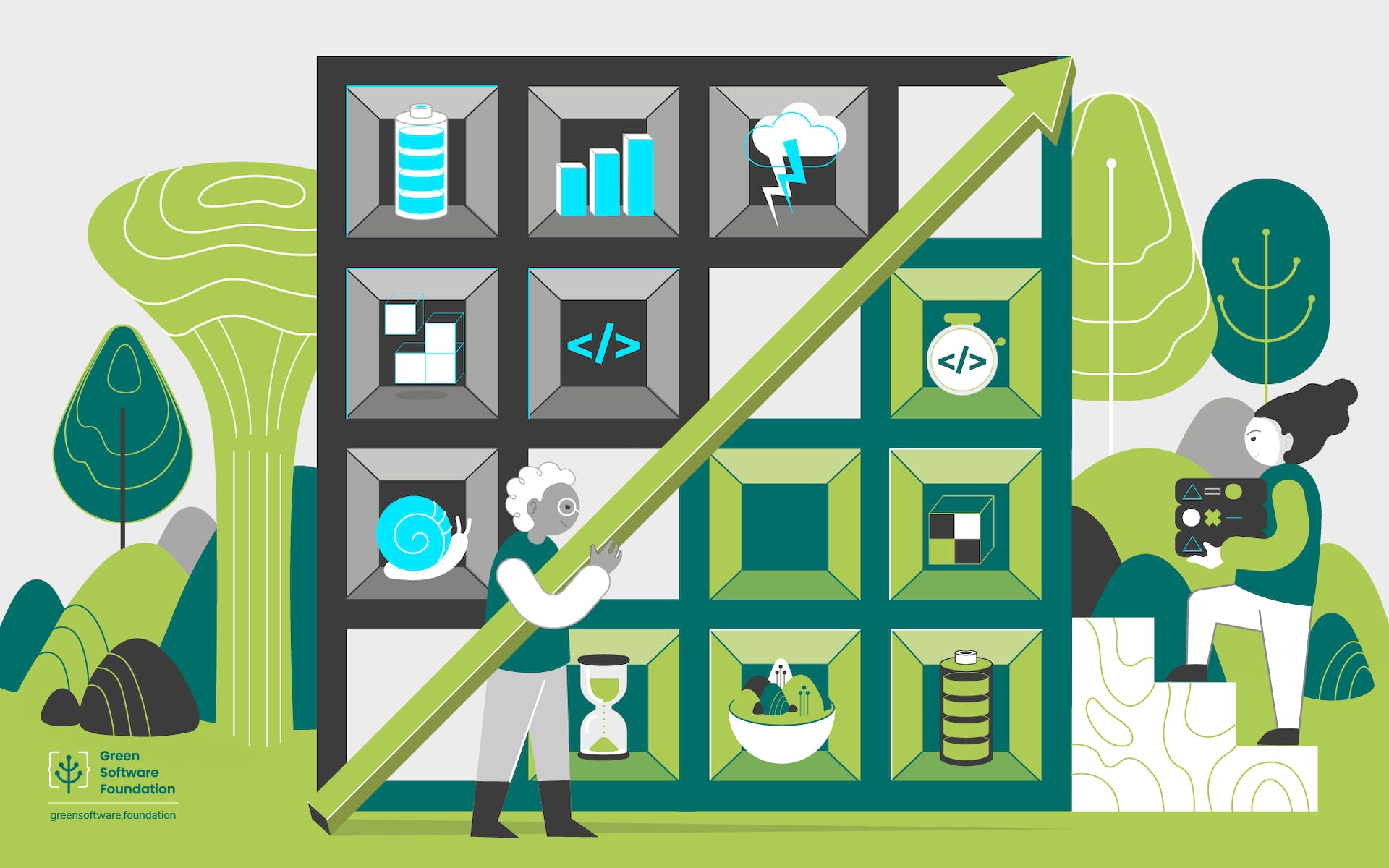 In this blog, we will talk about Greenup, Powerup and Speedup (GPS-UP), an easy to use energy metric that helps developers, students, and researchers understand not only the energy efficiency of their optimizations but helps them make better choices about what kind of optimizations they would like to make.

To improve software energy efficiency, we need a platform (e.g. Marcher) that can easily and accurately measure the energy consumption of various programs is necessary. We discussed this in a previous article. Equally important are metrics that can evaluate and compare the energy efficiency of software. Without good metrics, developers get confused and arguments may arise. For example, one can argue that energy efficiency is merely a byproduct of performance improvement because faster code tends to be more energy-efficient. Meanwhile, others can argue that energy efficiency and performance are conflicting goals. To reduce energy consumption, software performance must be sacrificed or vice versa. Both arguments are legitimate under certain circumstances but neither of them has revealed the big picture.

The physics of energy consumption and power

To better illustrate the problem, let us take a step back and look at the physics underlying energy consumption and power. The energy efficiency of software is affected by three things:

The units for energy, power and time are Joule, Watt, and Second respectively. A basic way to understand the correlations between performance, power, and energy consumption is that the energy consumed during a program’s run-time is the area under the curve of the power of the run-time of the program. 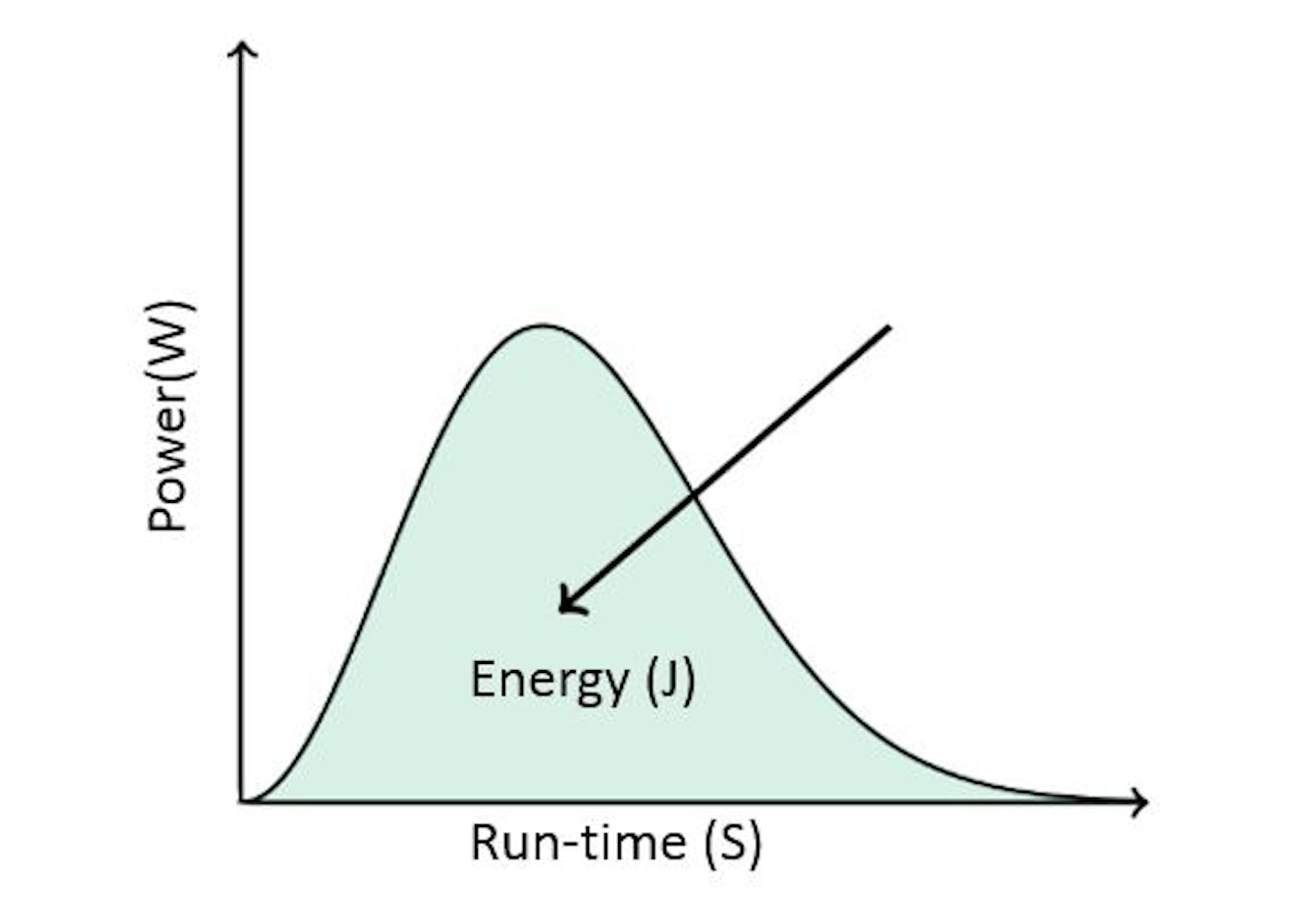 Energy consumed during a program’s run-time

There are very few existing metrics for software energy efficiency. Energy Delay Product (EDP) is the well-known one among them that considers both energy and run-time simultaneously.

EDP is certainly useful, but it is not adequate. Why is that?

Optimization 2 also parallelizes the code, but uses Dynamic Voltage Frequency Scaling (DVFS) to reduce the frequency of multi-cores. It runs for 50 seconds and consumes 5,000 Joules of energy. Optimization 2 runs 2 times faster but consumes half of the power thereby saving 4 times of energy.

So if EDP is not an effective tool for comparing the efficiency of two programs, what would be a better solution? Well, we need something that would give us multiple angles to evaluate the performance, power and energy. There are many ways to achieve energy efficiency gains like decreasing run-time, or decreasing power used for the same run-time.

In parallel programming there is a metric Speedup, which is defined as:

Similarly we define a metric Powerup to be:

Here, note that the optimized code goes on top. This gives us a ratio, so if the Powerup is greater than 1 the new code has a higher average power. That is often the case with parallel programs as they utilize more cores.

The last and most important metric we will introduce is what we call Greenup:

It is worth noting that, because the energy for a program is the product of the runtime and the average power consumption: 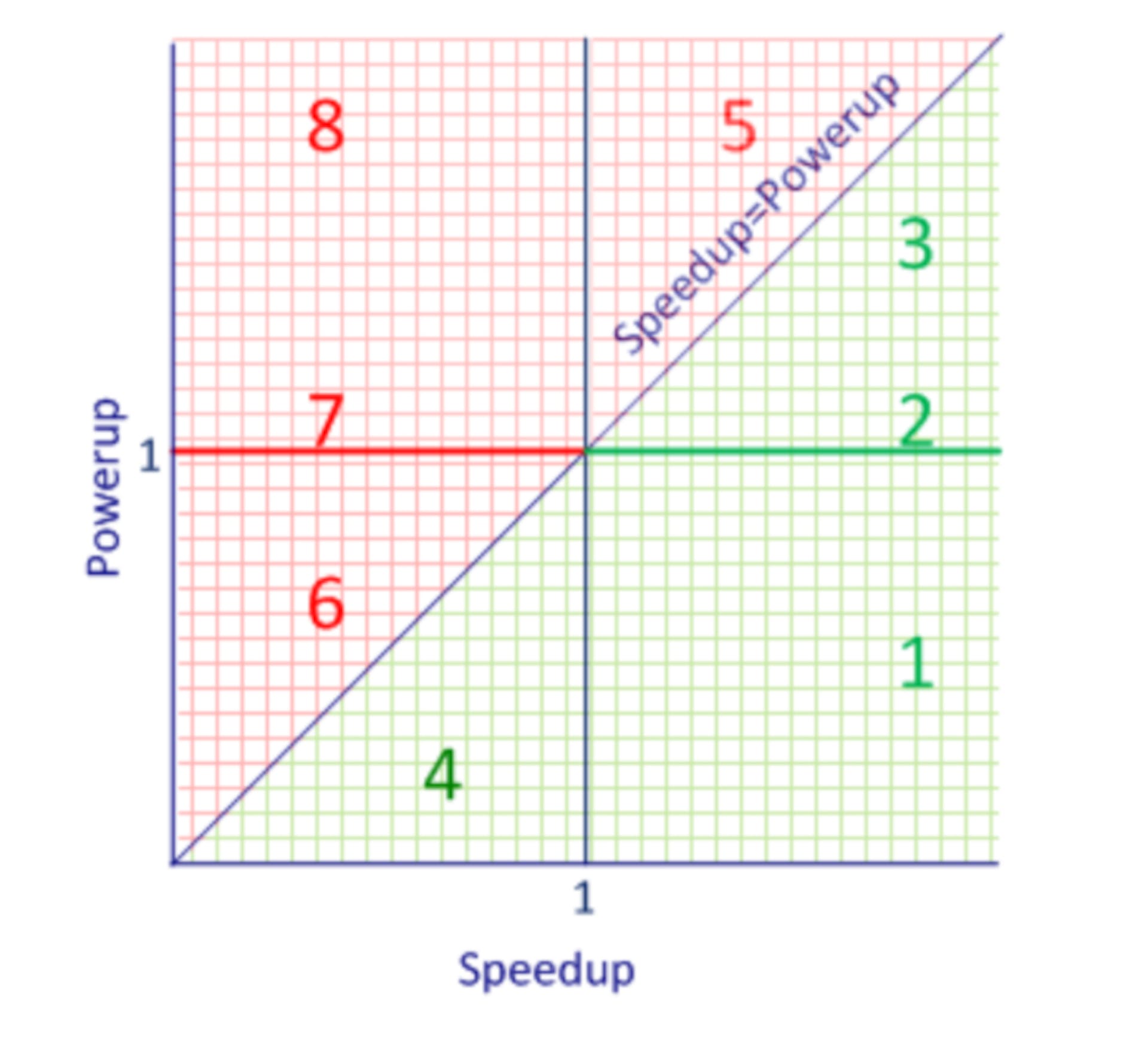 Software optimizations of all kinds categorized into eight quadrants

With Speedup, Powerup and Greenup,  software optimizations of all kinds can be categorized into one of the eight quadrants, as shown in the above graph.

The quadrants in green color indicate that optimizations can save energy.

This graph covers all possible scenarios and reveals the big picture of software energy efficiency.

Category 1 represents a type of optimization where you are using less average power and seeing Speedup. This is the ideal case, and it is often the result of optimizations like making better use of cache to avoid main memory access.

Category 8 represents the opposite. It is pretty much the worst thing you can do, invest in more power but the program runs slower.

Category 2 on the horizontal axis represents optimizations that have no effect on power but decrease overall run-time. This class of optimization is often found from improvements of serial code. That is, the energy gain is purely from performance gain.

Category 7 indicates that the modified version of code consumes the same power but degrades performance.

Categories 3 and 5 represent cases of higher power compared to the baseline code. These often represent two scenarios of parallelizing serial code. Either the increase in Speedup helps the program finish fast enough that it results in energy savings as in section 3, or the extra power does not lead to sufficient performance improvement thereby consuming more energy as in section 5.

Categories 4 and 6 represent cases of lower power compared to the baseline code. This is often the case when using Dynamic Voltage and Frequency Scaling (DVFS) to reduce power consumption by a processor.

Want to test your own code?

If you would like to test your own code to see which category your optimizations fall into, you can run your programs on GreenCode, which has built-in abilities to calculate Greenup, Speedup, and Powerup between two versions of programs, as shown in the picture below.

If you would like to see examples for each category and learn more about the GPS-UP metric, you can read our paper: Using the Greenup, Powerup, and Speedup Metrics to Evaluate Software Energy Efficiency.